“Remove the Handle”: Are You Getting Your Data in Front of Decision Makers?

“Remove the Handle”: Are You Getting Your Data in Front of Decision Makers?

Insurers have access to an unprecedented amount of information today. They can look at the treasure troves of internal information collected through historical artifacts, access external up-to-the-minute information on the current state of the relevant landscape, and capture behavioral information from the digital footprints of their customers and partners.

To best position a company in today’s competitive environment, information needs to be fresh, relevant, and curated for analysis on an ongoing basis. The insights from these analyses then need to be delivered in real time at the point of decision-making. As an example of how this was done successfully 200 years ago, the following story describes how a simple map stopped a cholera outbreak.

Bars on a Map

In 1854, London’s Soho district was experiencing a severe outbreak of cholera. At the time, the spread of disease was poorly understood and was generally attributed to the theory of miasma, or “bad air.” A local physician named John Snow (not to be confused with the “Game of Thrones” character) had his own theory but needed a way to convince others. Risking his own life going door to door, he interviewed the residents of Soho and created a detailed map that showed where each of the deceased had lived. Stacked black bars represented multiple deaths in close proximity, with the highest concentration on Broad Street.

Less than 700 feet long, Broad Street showed more than 87 cholera deaths on Snow’s map. Marshall Street, similar in length, showed another 34. With a small black bar representing the location of each person who had died from cholera, the map would eventually not only halt the outbreak but serve as the foundation for the field of epidemiology. However, one crucial action was required before the Soho area of the City of Westminster in London could free itself from the grips of the outbreak that would ultimately claim 616 lives. 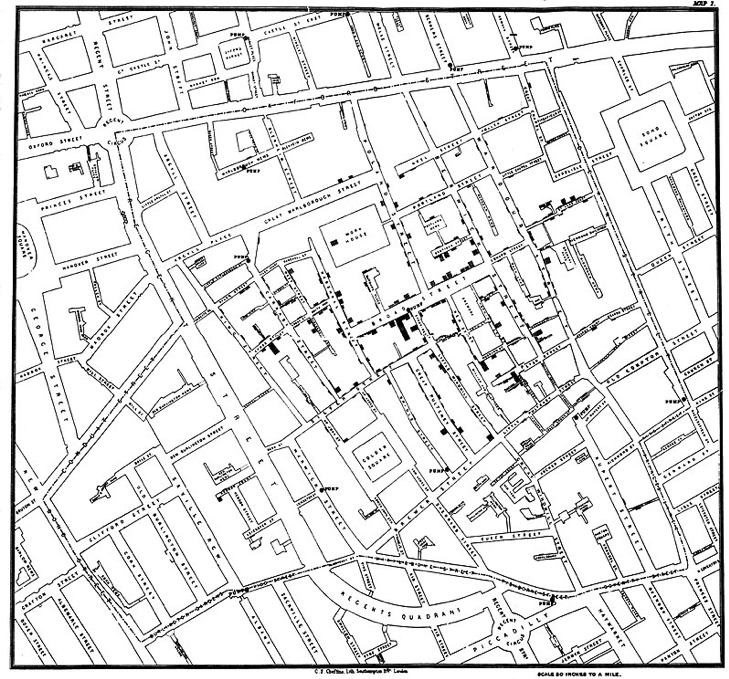 In addition to the location of the afflicted residents, Snow also marked the location of the different wells that locals used to collect drinking water with the help of a hand pump. At the center of the map, Snow could easily see what he suspected was the cause: a hand pump located in the middle of Broad Street. While the map did suggest a correlation between the deaths and the pump on Broad Street, it was Snow’s next step that stopped the outbreak and solidified his name in history.

Armed with the map, Snow approached the local government and argued that water from the Broad Street well was the cause of the cholera outbreak. Rather than post a sign to warn residents of the danger, the government took the unique step of removing the pump handle that was used to draw water from the well. Within days, the deaths stopped. Years later, the city would determine that the well had been built too close to a cesspit and sewage had leaked into the well. The result was the deadly cholera epidemic. With the handle removed, people were forced to drink water from wells that were not contaminated, preventing further incidents in the area.

People with the same inquisitive spirit as John Snow are well represented in the insurance industry today. With titles like Business Analyst or Data Scientist, they’re able to combine large amounts of data into a story that can improve insurers’ operational efficiency. However, just as it was for Snow, the challenge is getting this information into the hands of the people who make decisions on a daily basis. In the past, this could be accomplished through the periodic distribution of updated business rules and tables. Unfortunately, such information-rich formats could be difficult to apply and required the decision maker to combine information from multiple sources and systems.

Consider the example of a potential customer looking for coverage for a small but growing business. Even though the insurer may have developed R or Python models targeted to this segment, if the underwriter has to pivot between multiple screens to develop a quote, it may take several days to get back to the prospect. A digital-savvy small-business owner may have already secured coverage with another insurer by the time the original agent gets back with a quote.

On the other hand, an underwriter who can instantly create a quote is able to quickly engage with the prospect and build a relationship that has a higher probability of winning the business. In an ideal situation, the system has already decided if the application is eligible for straight-through processing, enabling some prospects to sign up instantly while enabling the underwriters to focus on higher-value accounts.

If you go to the Soho district today, you’ll find that much has changed since the days of John Snow. Broad Street has been lengthened and renamed “Broadwick Street,” and modern plumbing has replaced the local wells. However, at the corner of Broadwick Street and Lexington Street, you’ll find a replica well pump with the handle removed, commemorating Snow’s contribution to science and public health. The next time you see insightful information within your organization, remember this story and ask your team, “How do we get this information in front of someone who can *remove the handle***?”**