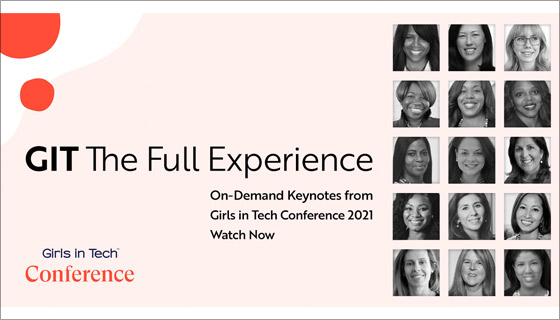 Another year, another awesome Girls in Tech Conference—despite being forced to use the word "virtual" as a prefix for this annual event once more.

With more than 60,000 members in 50 chapters around the world, Girls in Tech is dedicated to closing the gender gap in the technology sector. And this annual event features motivational keynotes, insightful panel discussions, and in-depth workshops to help women in our industry thrive at any stage of their careers.

I have to start off by telling you that it was an absolute honor to return to the GIT keynote stage again this year—especially when the list of other speakers included rock stars like Boeing CIO Susan Doniz, McKesson CTO Maria Lensing, TD Bank Chief Engineer Licenia Rojas, Mastercard SVP Dr. Alissa Abdullah and many (many) more.

Yet as cool as the experience was, putting together this year's keynote also became a surprisingly personal experience I'll never forget.

My Back to the Future Moment

The truth is, women have had to bust through brick walls, broken rungs, and glass ceilings in virtually every sector. And we already know the tech industry is tougher than most. So for this year's keynote, I set out to crystalize some of the lessons I've learned during nearly 20 years in technology—specifically, the things I wish someone could have told me along the way.

There was just one problem. For most of my career, the guideposts for women climbing the ranks of techdom fell somewhere south of nada and east of zip. So I started putting together a list of key lessons that encapsulated the broad brushstrokes of what I've come to know so well over the years.

What emerged was "Find Your 'Fearless' and Build the Career of Your Dreams"—a set of five simple rules for leading a vibrant career in your 20's, 30's, 40's, and beyond. You can watch it in the viewer above, and you can access all of the keynotes here. But I should add a few caveats first.

When I say these rules are "simple," it's not the same as saying they're "easy." But nothing worth fighting for ever is, right? Hard work is merely the cost of entry, and your smarts had better come in spades. As I learned the hard way, reaching the upper echelons of the tech world meant I needed to foster a level of tenacity, moxie, and emotional intelligence I couldn't have imagined when I first began my journey.

3 Gifts Commercial Lines Insurers Can Give Their Policyholders
7 Insurance Technology Trends That Will Transform the P&C Industry in 2023
Flaine: Guidewire’s Newest Release Powers Speed and Agility