“We achieved revenue and profitability above the high end of our guidance range for the second quarter, reflecting strong demand for both core system replacement and our newer products in the data management and digital engagement domains,” said
Marcus Ryu, chief executive officer, Guidewire Software. “We believe the appeal that all the products in our portfolio have to a diverse set of insurers globally validates our strategy of industry focus and investment in product expansion.”

Ryu continued, “Our products have become even more appealing as they enable significant changes in P&C insurance strategies in response to data driven decisioning and end-market digital preferences. We intend to extend our product leadership to further service the industry and support our continued growth in the years ahead.”

Guidewire is issuing the following outlook for the third quarter and fiscal 2016, based on current expectations: 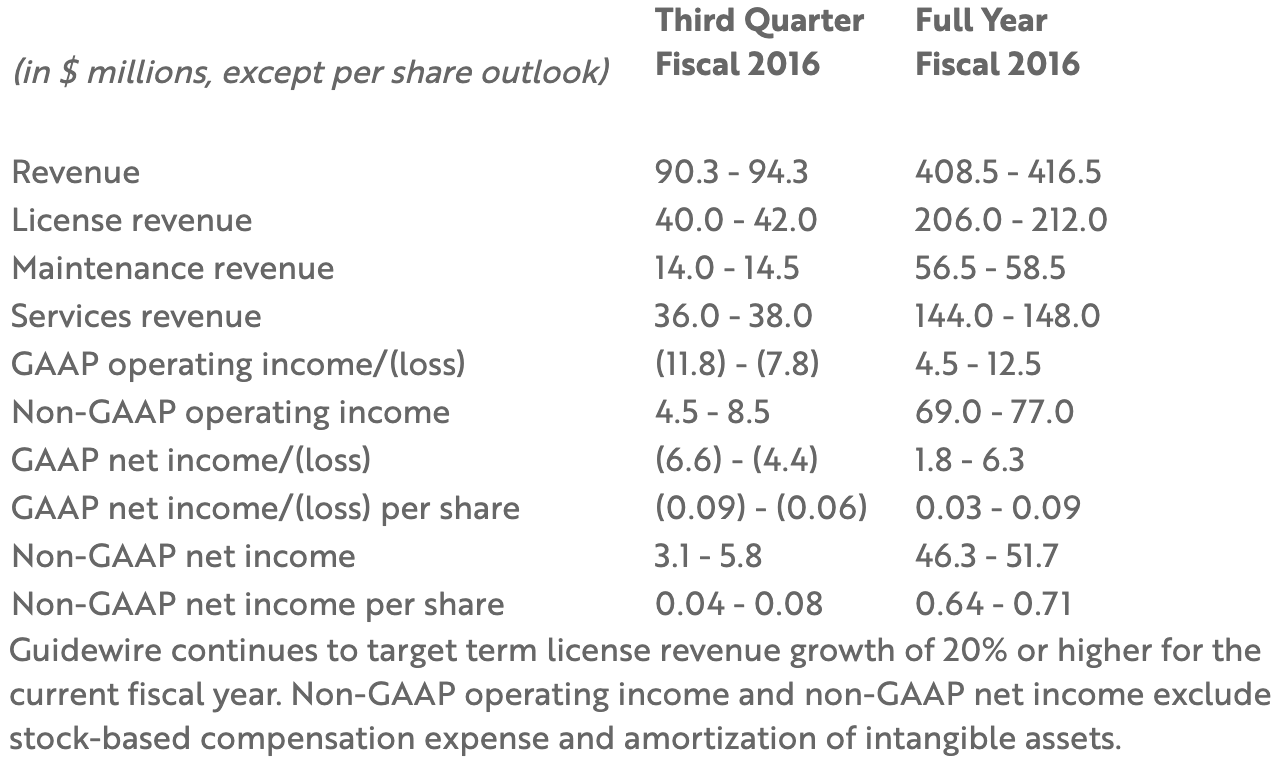 This press release contains “forward-looking statements” within the meaning of the “safe harbor” provisions of the Private Securities Litigation Reform Act of 1995, including but not limited to, statements regarding our financial outlook, market positioning and future investments. These forward-looking statements are made as of the date they were first issued and were based on current expectations, estimates, forecasts and projections as well as the beliefs and assumptions of management. Words such as “expect,” “anticipate,” “should,” “believe,” “hope,” “target,” “project,” “goals,” “estimate,” “potential,” “predict,” “may,” “will,” “might,” “could,” “intend,” variations of these terms or the negative of these terms and similar expressions are intended to identify these forward-looking statements. Forward-looking statements are subject to a number of risks and uncertainties, many of which involve factors or circumstances that are beyond Guidewire’s control. Guidewire’s actual results could differ materially from those stated or implied in forward-looking statements due to a number of factors, including but not limited to, risks detailed in Guidewire’s most recent Forms 10-K and 10-Q filed with the Securities and Exchange Commission as well as other documents that may be filed by the Company from time to time with the Securities and Exchange Commission. In particular, the following factors, among others, could cause results to differ materially from those expressed or implied by such forward-looking statements: the market for our software may develop more slowly than expected or than it has in the past; quarterly and annual operating results may fluctuate more than expected; seasonal and other variations related to our revenue recognition may cause significant fluctuations in our results of operations and cash flows; our reliance on sales to and renewals from a relatively small number of large customers for a substantial portion of our revenues; our services revenues produce lower gross margins than our license and maintenance revenues; assertions by third parties that we violate their intellectual property rights could substantially harm our business; we face intense competition in our market; weakened global economic conditions may adversely affect the P&C insurance industry including the rate of information technology spending; our product development and sales cycles are lengthy; the risk of losing key employees; changes in foreign exchange rates; general political or destabilizing events, including war, conflict or acts of terrorism; and other risks and uncertainties. Past performance is not necessarily indicative of future results. The forward-looking statements included in this press release represent Guidewire’s views as of the date of this press release. The Company anticipates that subsequent events and developments will cause its views to change. Guidewire undertakes no intention or obligation to update or revise any forward-looking statements, whether as a result of new information, future events or otherwise. These forward-looking statements should not be relied upon as representing Guidewire’s views as of any date subsequent to the date of this press release.