How and When did Insurance Meet Pop Culture?

How and When did Insurance Meet Pop Culture? 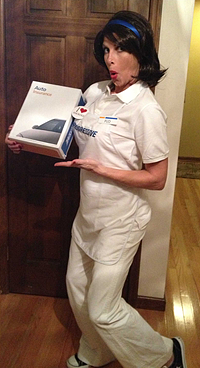 As the month of October started to come to a close I had the bright idea to dress up for Halloween as “Flo”, Progressive’s latest marketing marvel. Anyone who really knows me wouldn’t question why, but in all honesty I really wanted to get my hot little hands on one of those “I Love Insurance” buttons that “Flo” so proudly wears on her chest. If anyone should be “Flo” for Halloween, surely it should be me.

As with most aspects of my life, time was of the essence…how would I piece together this costume in a matter of days? Turns out it wasn’t hard at all. Progressive sold the costume on their website, everything from the wig and headband to the coveted “I Love Insurance” button. They even recommend the proper shade of lipstick to complete the ensemble. Within less than 24 hours I was all set for the big night…but I had no idea that I was indeed in for quite the social experiment.

I joined my best friend and her family in their neighborhood for some good ol’ fashioned door-to-door trick-or-treating. I deliberately visited the home of the neighborhood’s long standing insurance agent (a competitor of Flo’s) and he was so tickled that he laughed out loud and did a little dance at the front door. And then there was one lady that actually thought I was there on Halloween to sell her insurance door-to-door, and she was quite adamant that her "good neighbor" fully satisfied all of her insurance needs.

But it got better.

A little girl who couldn’t have been more than six or seven years old said “hey, Mommy, there’s the Insurance Lady.” Some teenagers who knocked on doors behind us all night came up and said they envied my costume so much that they were going to steal my cool idea next year. One guy shouted from his porch “Hey, Flo…where’s your bundler?” By the end of my night I was amazed with everything this costume brought to light, and it made me think...

When I was a kid, insurance was the furthest thing from cool. No one would have ever considered dressing up for Halloween as anything even remotely related to insurance. And you sure couldn’t fulfill such a whimsical costume request and have it delivered to your doorstep in 24 hours. How and when did insurance meet pop culture? Who would have thought that insurance mascots like Flo and others would become highly recognizable icons that resonate with people of all ages? This brand recognition not only resonates within today’s marketplace, they’ve managed to span generations ahead of their target market to plant the seed now. Today’s teenager is probably years from shopping for or paying for their own insurance. But when they get there, they’re already customers. That six-year old girl and her generation, they’re likely customers too. Now if that’s not forward thinking I don’t know what is. Maybe that’s why they named their company “Progressive”.