At Guidewire Live, we help our customers to understand their business in context of external data and make better operational and strategic decisions. Until recently, we assumed that our customers must also be “live” on a Guidewire core system in order to take advantage of these capabilities. That is changing now that we have released Spotlight—an underwriting tool for precisely evaluating location-based risk that PolicyCenter customers can start using even before completing their core system implementation. But we were surprised (pleasantly) to find another insurer who could benefit from Guidewire Live: one who was not yet a Guidewire customer at all!

The claims department at a Canadian personal lines insurer wanted to purchase ClaimCenter and was partnering with our Value Consulting team to justify the benefits of core system replacement to a skeptical board of directors. In particular, the insurer’s board doubted that predicted reductions in claim cycle times were truly achievable. So Value Consulting Director Zach Gustafson came to me with a fascinating question: What times to settlement were other Canadian insurers achieving on comparable claims?

That’s a question we can answer in one minute with our Compare application. We now have seven Canadian insurers sharing anonymized data with each other in Guidewire Live’s benchmarking program, and they all use the same core system with the same underlying data model. So we could quickly view the average cycle time to close certain types of claims (e.g. separating auto physical damage claims from injury claims). The hard part was for the insurer to extract their own times to settle from their existing mainframe systems. But when they did, this is an example of what we found when we put the two pieces together: 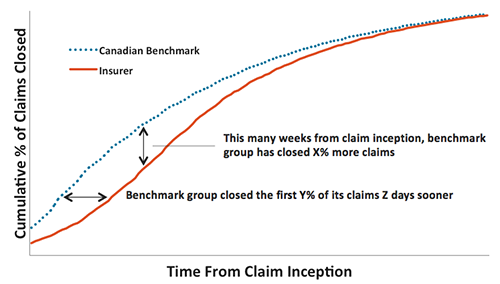 Though I have altered and obscured the exact numbers, the difference was significant—well beyond the improvement that the insurer was forecasting. Given the company’s existing correlation between time to settle and indemnity paid, the potential savings passed seven figures per month. Armed with this information—and all the other work they put into preparing their business case—the claims team secured approval to purchase ClaimCenter.

Reduced cycle times and lower indemnity payments will not appear magically; the insurer must commit itself to process change and work hard to follow through. But a hard numerical comparison to other ClaimCenter customers showed “the art of the possible” and convinced the insurer’s leadership that real change was achievable. We at Guidewire Live are proud to have contributed to this insurer’s journey thus far, and we look forward to tracking their ongoing progress (with much less effort!) once they are able to use Compare for themselves.